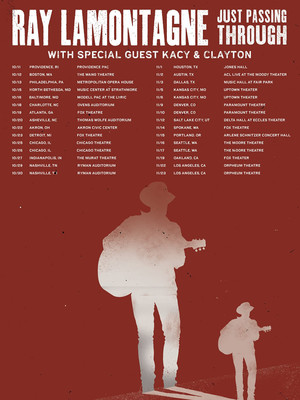 Ray LaMontagne is an award-winning singer-songwriter and global festival favorite, with his husky vocals and sensual lyrics carving him a niche in a competitive genre. With an ever-growing, devoted fan base as a testament to his musical talents and appeal, there's something about Ray.

After leaving high school, he went on to work in a shoe factory in Maine, before being inspired to write music by listening to a record by Stephen Stills, Manassas. His rootsy, bluegrass style has been likened to Otis Redding and Van Morrison, among others, with a gravelly, but velvety folk voice that dances expertly around earthy songs.

Ray LaMontagne continues to tour with his acoustic and stripped down version of his top hits, don't miss him when his Just Passing Through Tour hits your town!

Loved every minute of it. My wife bought tickets for my bucket list. The... more

I couldn't have enjoyed the show more! I am a long time fan and it was... more

Sound good to you? Share this page on social media and let your friends know about Ray LaMontagne at Fox Theatre Oakland.