Sorry! You missed Camila and Sin Bandera at Paramount Theater 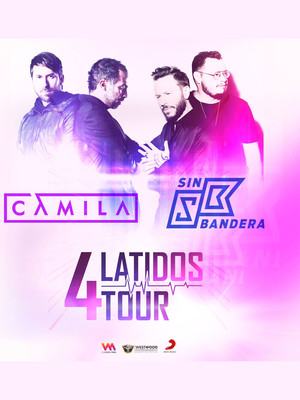 The historic 4 Latidos Tour sees the iconic Latin pop duos share a stage for the first time ever!

Why See Camila and Sin Bandera?

For the first time ever in the proud history of Latin pop, Mexican pop-rock duos Camila and Sin Bandera will take the stage together on their co-headline joint jaunt the '4 Latidos Tour'. Whilst the bands have collaborated many times over the course of their much-celebrated careers, the tour will solidify their musical friendship at venues around North America. Pack some tissues, because there won't be a dry eye in the house after these seasoned balladeers pluck on the audience's heartstrings with their Latin-infused romance.

Formed in 2006, Camila cultivated a stellar career with sharply-written rock-leaning power anthems that have made them nothing short of a phenomenon in their home country. Their international, major-label success is mirrored by Sin Bandera, who formed in 2002 and forged their own place amongst Mexico's modern music legends thanks to a gift for writing melodic, soulful Latin pop. For nearly two decades, the Latin Grammy, Grammy and Billboard Award winning musicians have honed their craft, transforming into consummate showmen that know a thing or two about pulling off a satisfying, soul-stirring show you won't want to miss.

Sound good to you? Share this page on social media and let your friends know about Camila and Sin Bandera at Paramount Theater.